Your innovation can join this mission. #TogetherForGender-based violence.

One of the main reasons for continued violence is the justice system’s failure in GBV cases. These failures create an environment where perpetrators of violence are not held accountable for their actions.

We are in urgent need of part-time and virtual volunteers, to assist 5-15hours /week. Please team with the Siyakholwa team and Gender-based violence victims for justice. Currently, we have 12 cases with evidence but no justice, we need help to get justice for the innocent.

You can send your information and details to [email protected]  or give us a call with the below details or WhatsApp 0681685486.

Take a stand with us, and let’s do something to create radical change for those stuck in the endless cycle of gender-based violence.

Why should you get involved in the fight against gender-based violence?

“Estimates published by WHO indicate that globally about 1 in 3 (30%) of women worldwide have been subjected to either physical and/or sexual intimate partner violence or non-partner sexual violence in their lifetime.”

“Most of this violence is intimate partner violence. Worldwide, almost one third (27%) of women aged 15-49 years who have been in a relationship report that they have been subjected to some form of physical and/or sexual violence by their intimate partner.”

“In South Africa, sometimes known as the ‘destination of femicide’, more than 2,700 women have been murdered as a result of gender-based violence (GBV) since 2000. Although grassroots organisations have persistently campaigned to end GBV, many women in South Africa continue to suffer abuse. Now, South Africa’s GBV problem is worsening, as lockdown measures have trapped women inside with their abusers.”

Prior to the pandemic, femicide in South Africa was already five times higher than the global average and the female interpersonal violence death rate was the fourth-highest out of the 183 countries listed by the World Health Organisation in 2016. Evidence has now emerged that suggests cases of violence against women are increasing.

Researchers from the Wits School of Governance suggest that the lockdown measures are likely to be the cause of this increase in GBV, as women were forced to stay home and left vulnerable to domestic abuse. In addition, the lockdown has prevented access to civil service groups dedicated to supporting victims of GBV.

Yet, victims already faced issues seeking support and justice before the pandemic. In South Africa, reports of GBV are often dismissed by the police who perceive the issue as a private matter for families, rather than a criminal matter for the courts. There is also the stigma associated with sexual violence.

Together, these factors contribute to the underreporting of GBV cases.”- South Africa’s Secondary Pandemic: A Crisis of Gender-Based Violence >> 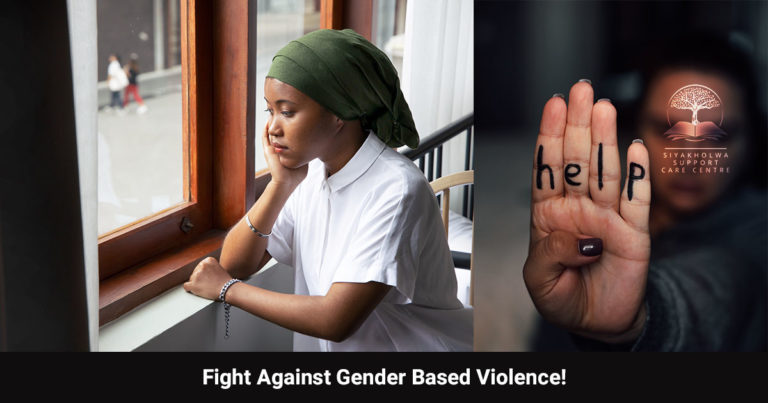 Stand up with us and let’s work together to end the abuse.

With your support, we can help those in need, don’t look away but help us to stand tall and bring justice to those who are innocent. It starts with us and continues with your support.

Check out the below links for more info!

Siyakholwa Support Care Centre
Get behind us in supporting our communities.

WhatsApp US
OR
Call Our Board Member /Team Leader – Sandy Phillips

To create a world of zero hunger, decent work and economic growth, throughout South Africa and the entire continent of Africa.

Designed By The Place Web Design

We use cookies on our website to give you the most relevant experience by remembering your preferences and repeat visits. By clicking “Accept All”, you consent to the use of ALL the cookies. However, you may visit "Cookie Settings" to provide a controlled consent.
Cookie SettingsAccept All
Manage consent

This website uses cookies to improve your experience while you navigate through the website. Out of these, the cookies that are categorized as necessary are stored on your browser as they are essential for the working of basic functionalities of the website. We also use third-party cookies that help us analyze and understand how you use this website. These cookies will be stored in your browser only with your consent. You also have the option to opt-out of these cookies. But opting out of some of these cookies may affect your browsing experience.
Necessary Always Enabled
Necessary cookies are absolutely essential for the website to function properly. These cookies ensure basic functionalities and security features of the website, anonymously.
Functional
Functional cookies help to perform certain functionalities like sharing the content of the website on social media platforms, collect feedbacks, and other third-party features.
Performance
Performance cookies are used to understand and analyze the key performance indexes of the website which helps in delivering a better user experience for the visitors.
Analytics
Analytical cookies are used to understand how visitors interact with the website. These cookies help provide information on metrics the number of visitors, bounce rate, traffic source, etc.
Advertisement
Advertisement cookies are used to provide visitors with relevant ads and marketing campaigns. These cookies track visitors across websites and collect information to provide customized ads.
Others
Other uncategorized cookies are those that are being analyzed and have not been classified into a category as yet.
SAVE & ACCEPT